I think living with an ex-vegan makes people think I’m a super healthy person. While I don’t cook unhealthy food, I definitely love sweets and beer and work in an office that is chock full of what I like to call corporate butt wideners: donuts on Friday, bagels on Monday, a beer fridge…shall I go on?

Working in this atmosphere has taught me that I have zero self-control when it comes to treats, which I blame on my inherited sweet tooth from my pops. And while my dad loves to bake (he is the king of pies) we led a really healthy childhood which taught me how to feed myself and others in a nourishing way. I clearly cook much differently than how I learned at home, my dad is the main cook and is a “meat and three” guy, whereas I am a one-pot meal kinda gal.

Anyway…. we decided to be those annoying people and try out the Whole 30. Both of us were feeling a little…bloated?…lately and it’s can’t hurt to cut out processed food can it?! Also, I’ve received some health news (like that vagueness?!) and my doctor suggested going gluten and soy-free, which is a big part of the Whole 30.

If you want to know the specifics of the diet, use that Google machine. But my understanding is: Whole foods only, no dairy, grains, soy, sugar or booze. To me, it’s a challenge to see if I can do it. I am less worried about the extreme specifics, and I’m following the rules about tiny ingredient additions… but not to the point where it’s a huge economic strain, ya dig? Also, I snack. Always and forever. If you’re a diligent Whole 30 follower, then I assume you’d disapprove…but that’s cool with me.

Since it’s a new way of eating and cooking, I am keeping a daily diary of what I cooked – it’s a LOT of cooking – and ate in a day. If that interests you, keep reading!

It was super hard to find anything to eat in the airport, which I knew would happen. Since I knew I’d be starting this diet on my way home from a weekend full of cake, pizza and beer, I brought along a Larabar, which most people consider a cheat. In this case, I was pleased to eat a whole foods meal in the airport. Unfortunately, I checked the ingredients later and the egg cups had cheese…but I gave it the old college try!

Thoughts?: Woke up STARVING in the middle of the night

Lunch: The rest of the fajita veggies over salad with salsa and guac

Snack: Smoothie with 100% cacao powder, almond butter, banana and almond milk. (I was home sick so a smoothie was a work-day snack option_

Thoughts?: Cacao is a contested ingredient in Whole 30 because they don’t want you making fake desserts. That smoothie was 100% a fake dessert made with whole foods and I’m cool with it. Obviously, I’d love to get away from my 3 pm sugar cravings and hopefully I’ll get better at it. 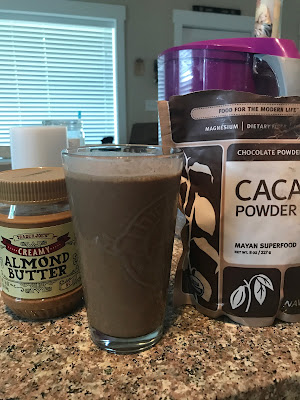 Dinner: Wait for it…salmon cakes and pickles. Seriously so good!

Cooking: NONE, first day yet! Only ate ready to eat or pre-prepped foods.

Thoughts?: I was still home sick this day, and all I wanted to do was eat! That comfort food/boredom craving hit hard.

Brekky: Oatless Oatmeal. This was a winner! I followed this recipe at the suggestion of my Whole 30 Buddy Caroline

Lunch: Sheet pan bake, the leftovers that wouldn’t die. This was surprisingly good after 4 days.

Cooking: Smashed the nanners into the “oatmeal” and gave it a few minutes of swift stirring on the stove, that’s it! 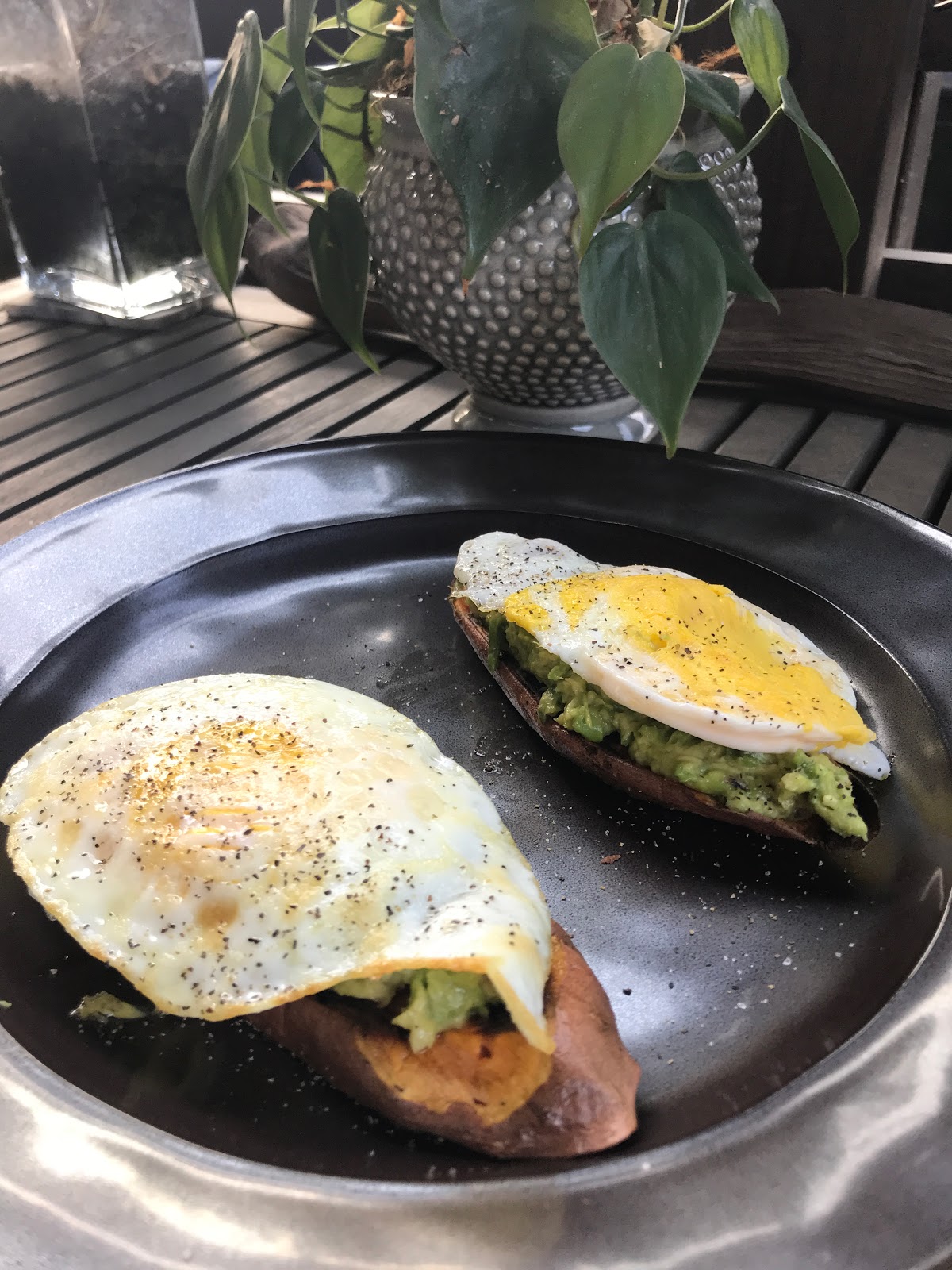 Brekky: More oatless oatmeal – It was even better cold this time

Dinner: We had our Whole 30 compadre over and started by putting out a plate of olives, pickles, caperberries and chorizo while cooking. For dinner, we had tuna steaks, braised brussels, spaghetti squash and asparagus.

Cooking: Heather did all the dinner prepping and cooking and then I jumped in to sear the tuna! 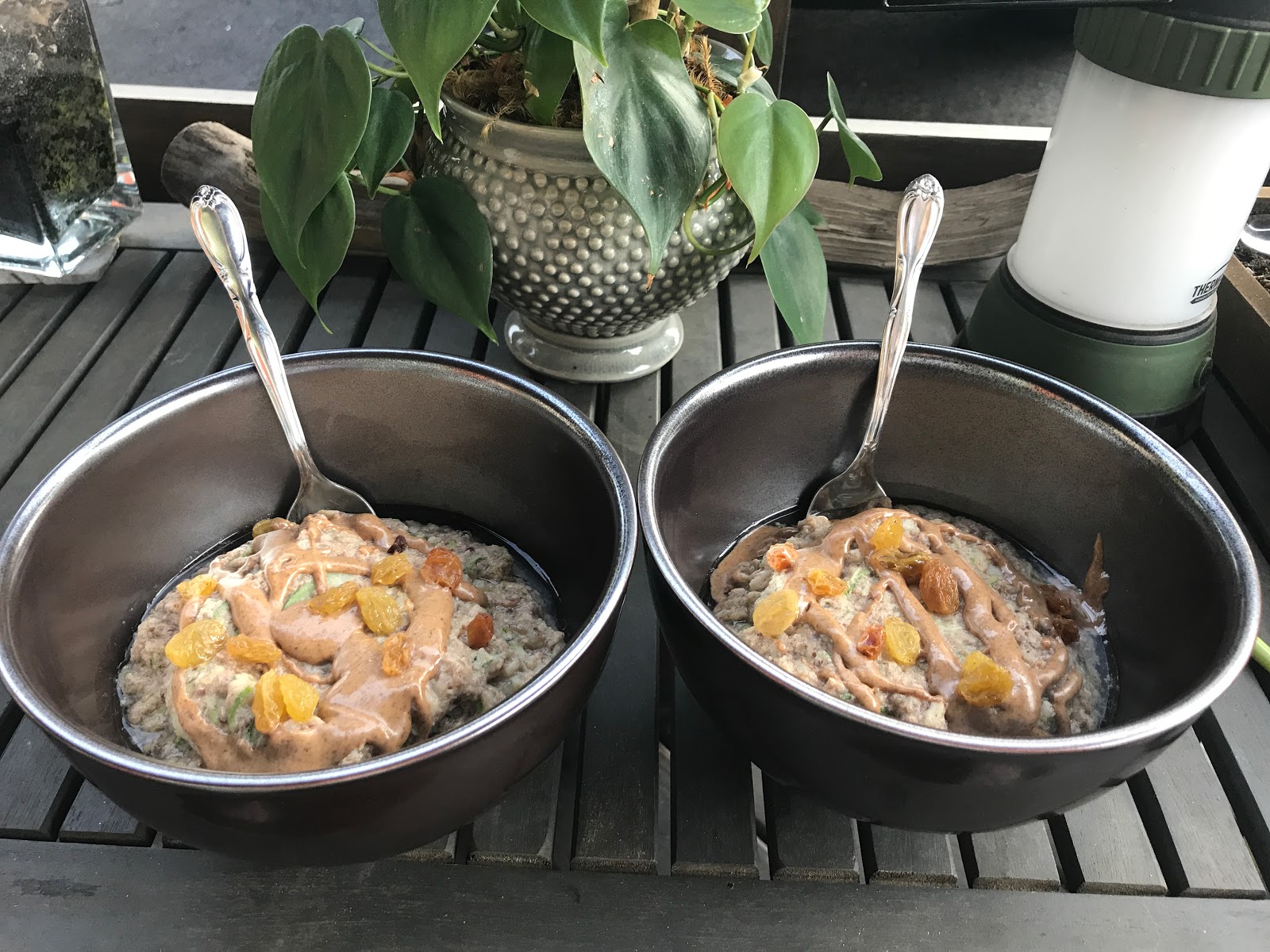 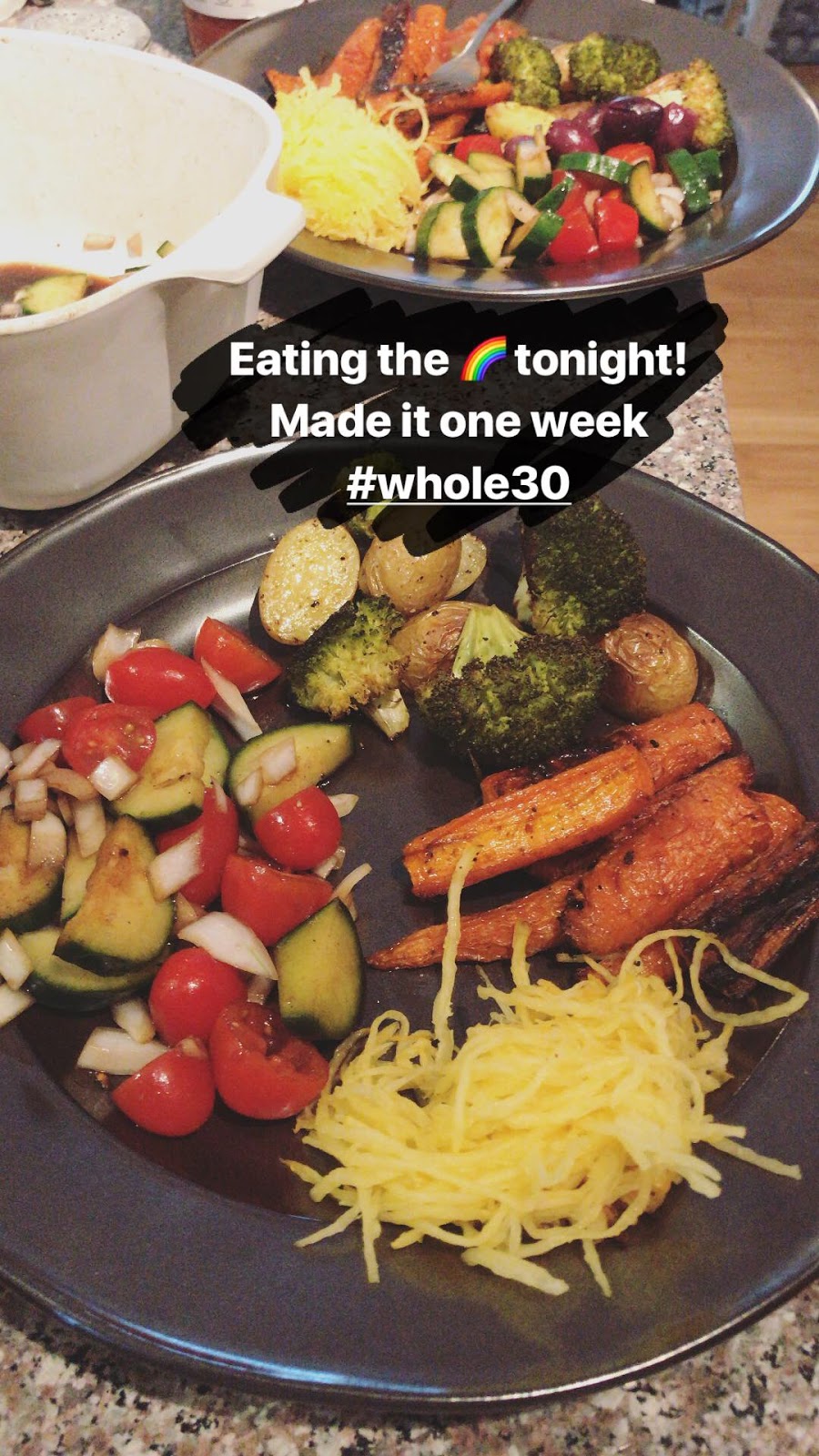 I am by no means a food photographer, but I hope some of these photos helped you get an idea of what this looks like!