As I mentioned, I spent my vacation time between jobs in two sweaty cities. The first was Philly, helping my sis get ready for baby (said baby is now in the world, expect many photos!) and the second was Folly Beach, South Carolina.

Heather and I were debating where to spend that second week, and really wanted to take our camper out for a spin and disconnect for a bit. We thought Daisy would be finished by the end of July, and we were going to camp for a week. Obviously, that didn’t pan out, so we headed to the beach! 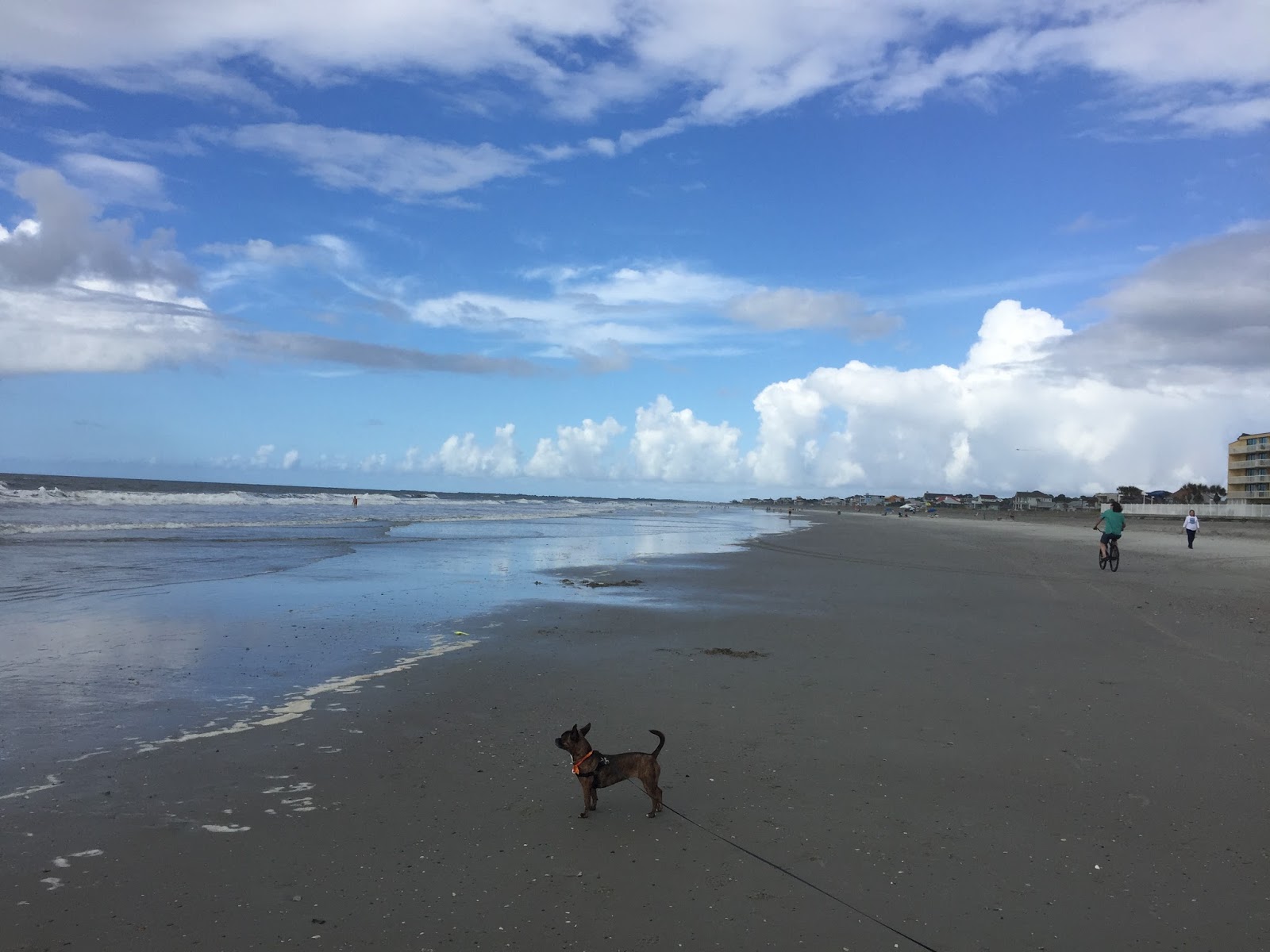 We’ve spent time all around Charleston, including Isle of Palms, Johns Island and of course Charleston itself. Folly has always been a spot we’ve wanted to check out and after having spent a week there, I know we will definitely be going back.

Trip planning happened a little last minute (#YOLO) so we splurged a bit on the cutest Bed and Breakfast. Not to say that it was extravagant or super-fancy, but we typically go the hostel route or rent a private room in a house on Air BnB. But, since we were staying for a whole week, we really wanted to be comfortable and have our own space. And, to be totally honest, I was starting a new job the day after we returned home, so that extra level of comfort was desirable. I find that a beautiful environment really adds to the relaxation level, and the Beachside did not disappoint! It is seriously one the the cutest places I have every stayed! 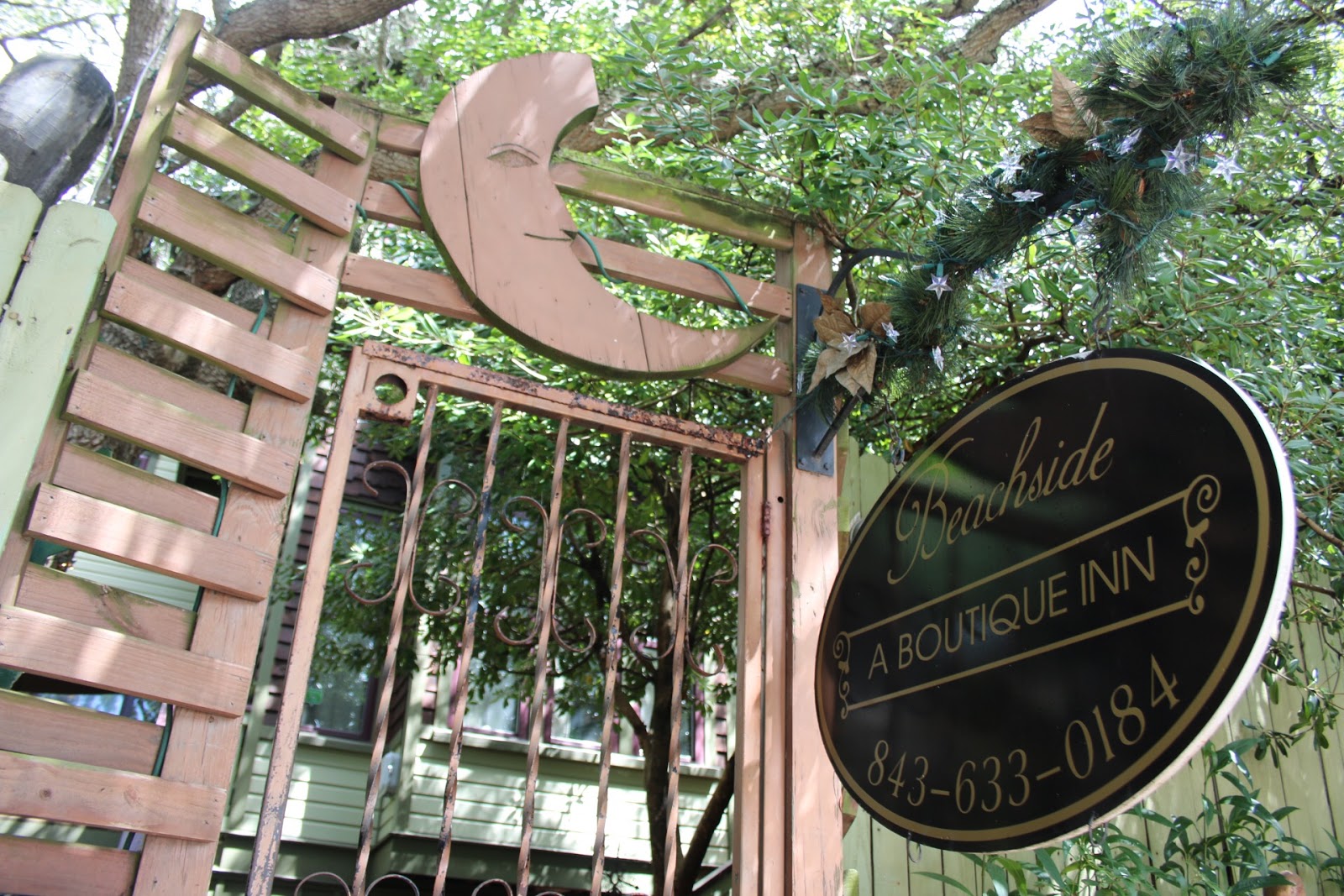 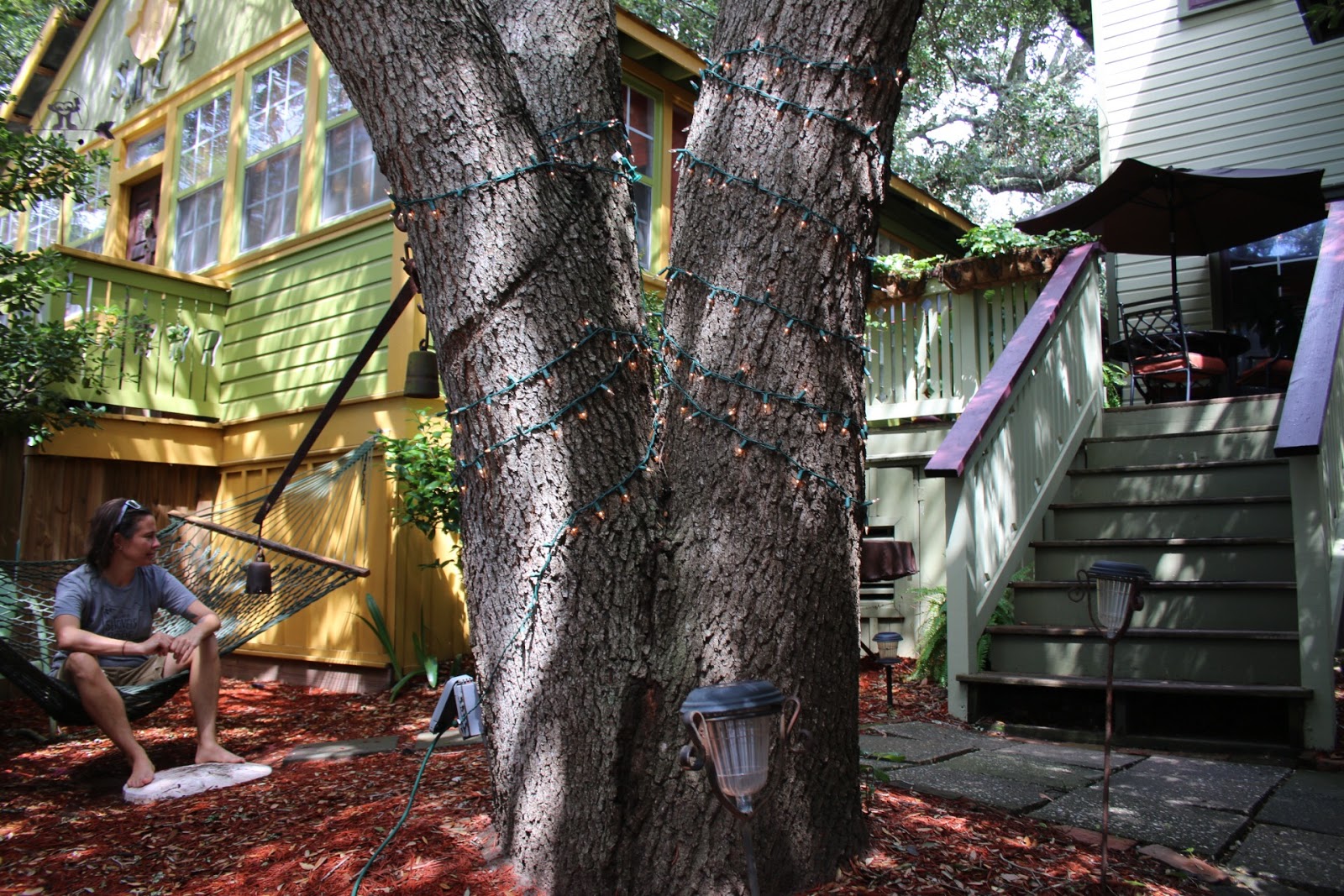 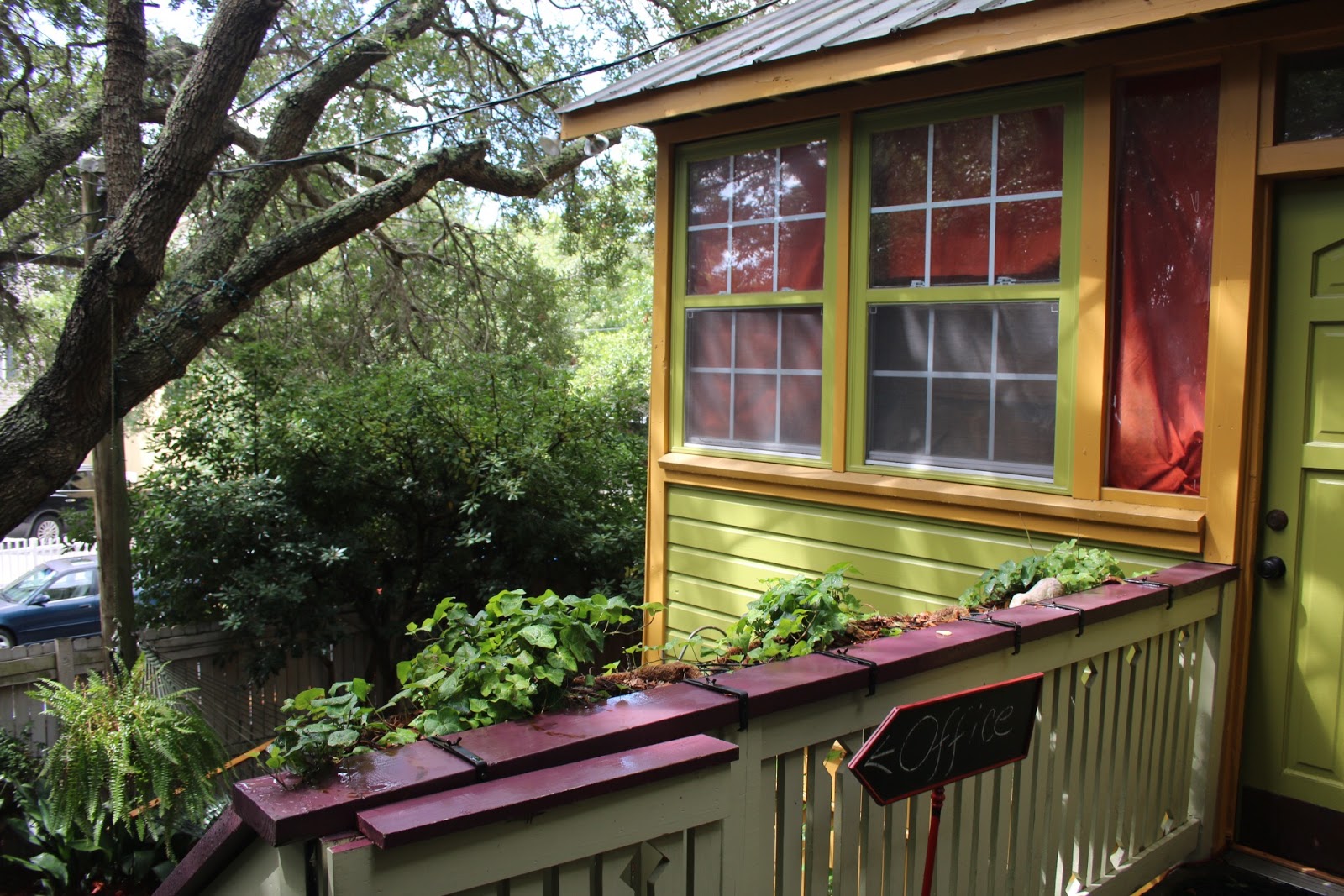 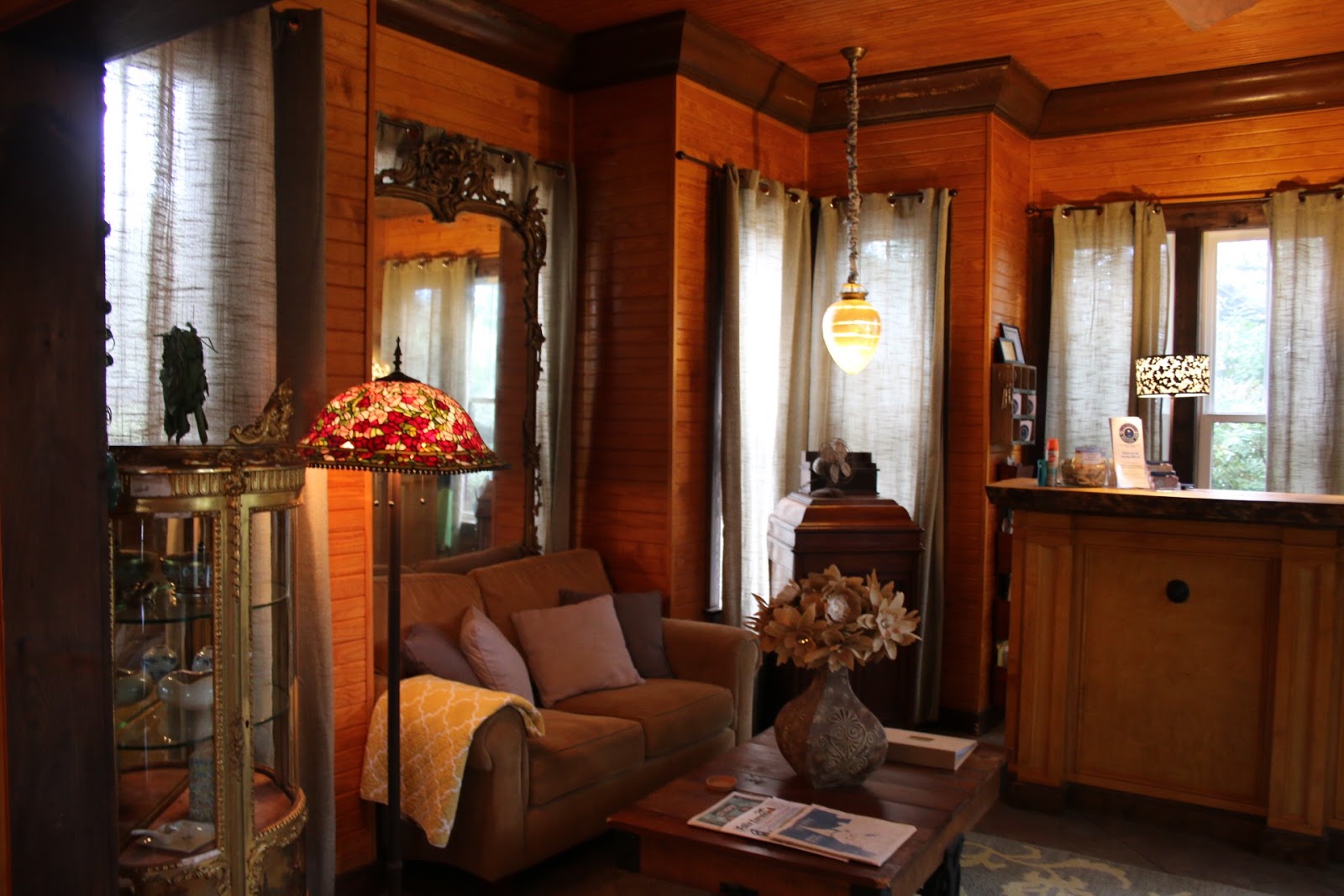 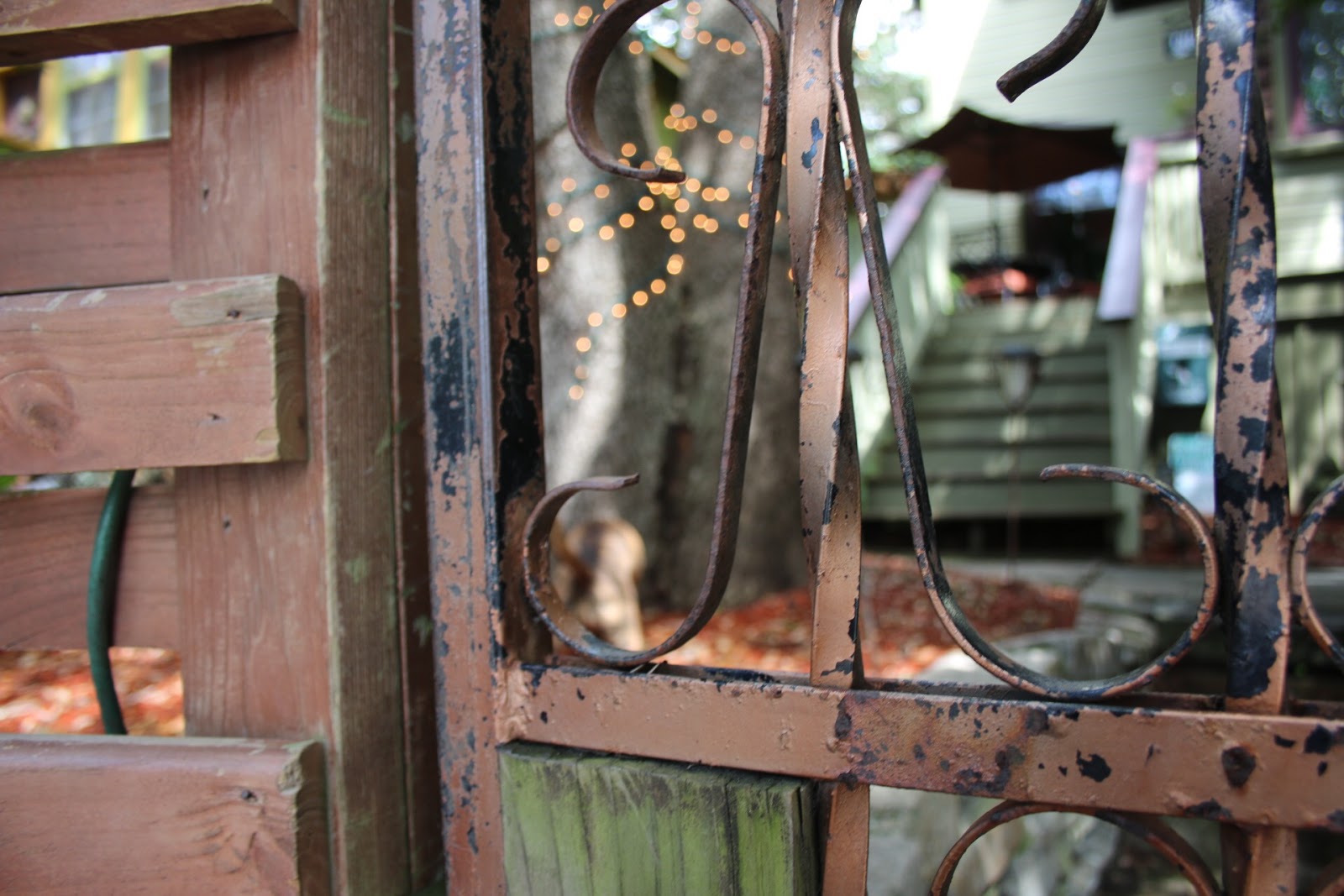 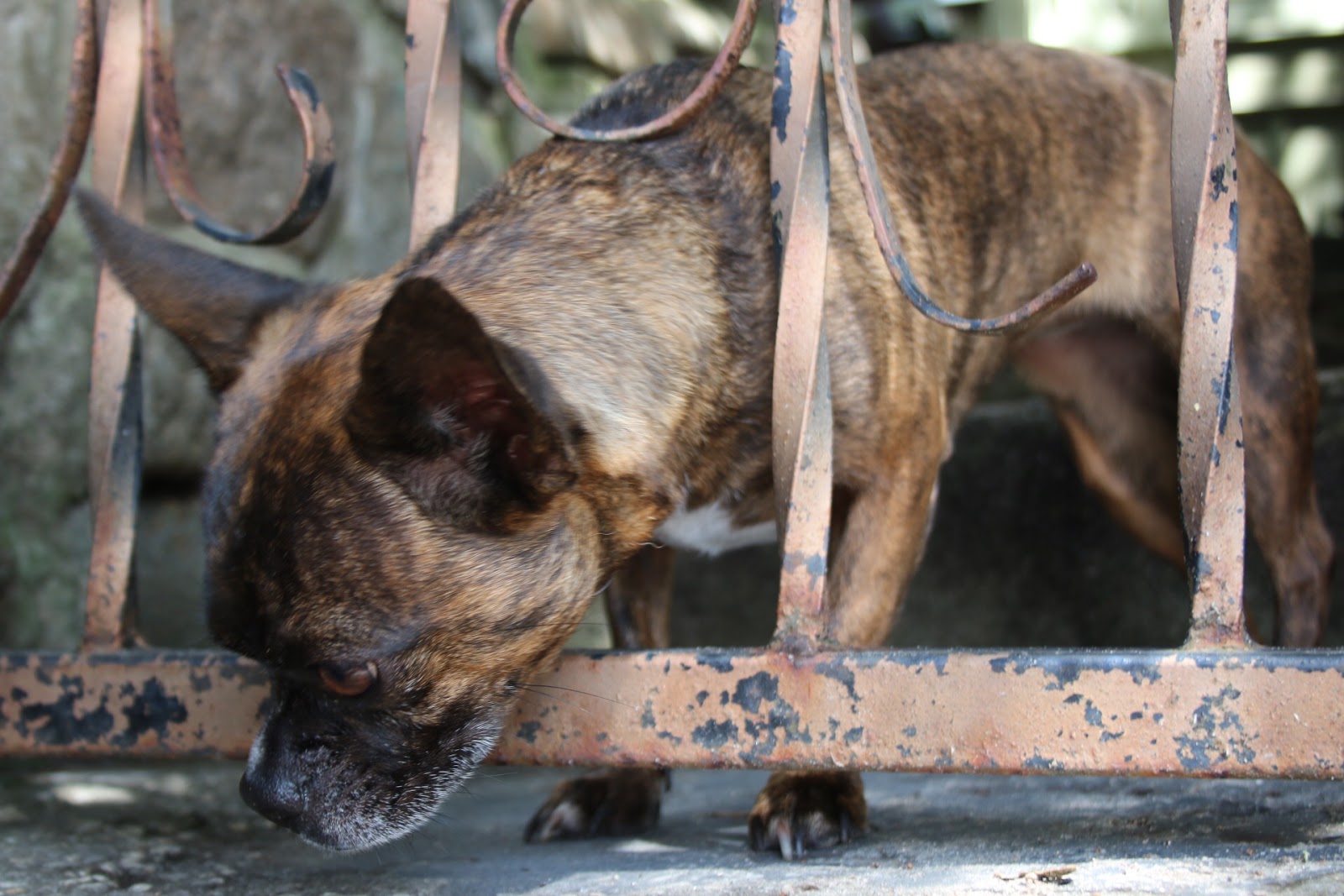 The BBI is only one block from the beach and plopped right in the center of downtown, so we only used our car the day we went into Charleston. And although it was literally three blocks from the closest bar, it was never loud at night. Folly turned out to be a nice mix between a family-friendly beach town and a semi-young party town. My elderly, yet cocktail-y, self can get down with this.

On our first night there, a Monday, we headed to Taco Boy on the recommendation of a friend and scarfed down some delicious tacos before venturing out to find some live music. Heather spotted the free A&E paper and scoped out a “Johnny and June” tribute band called Sally and George at a bar named Rita’s. {Coming from Central PA, Rita’s will always mean Italian Ice to me, so I found this very confusing. But I digress.} The duo was super good and we actually chatted with them at the bar after their set and found that we know some mutual people in Asheville. This set the stage {pun intended} for the theme of Folly Beach: Small town vibe and super friendly people.

The next day we finally made it to the water! Early mornings they allow dogs on the beach so we took Mozey for a nice stroll before settling in for a day of roasting (i.e. hiding in the shade, only venturing out to bob in the waves), reading and snacking. I swear the only time I eat Cheetos is when I’m at the beach, a habit formed during many beach weekends with my beloved college friends. 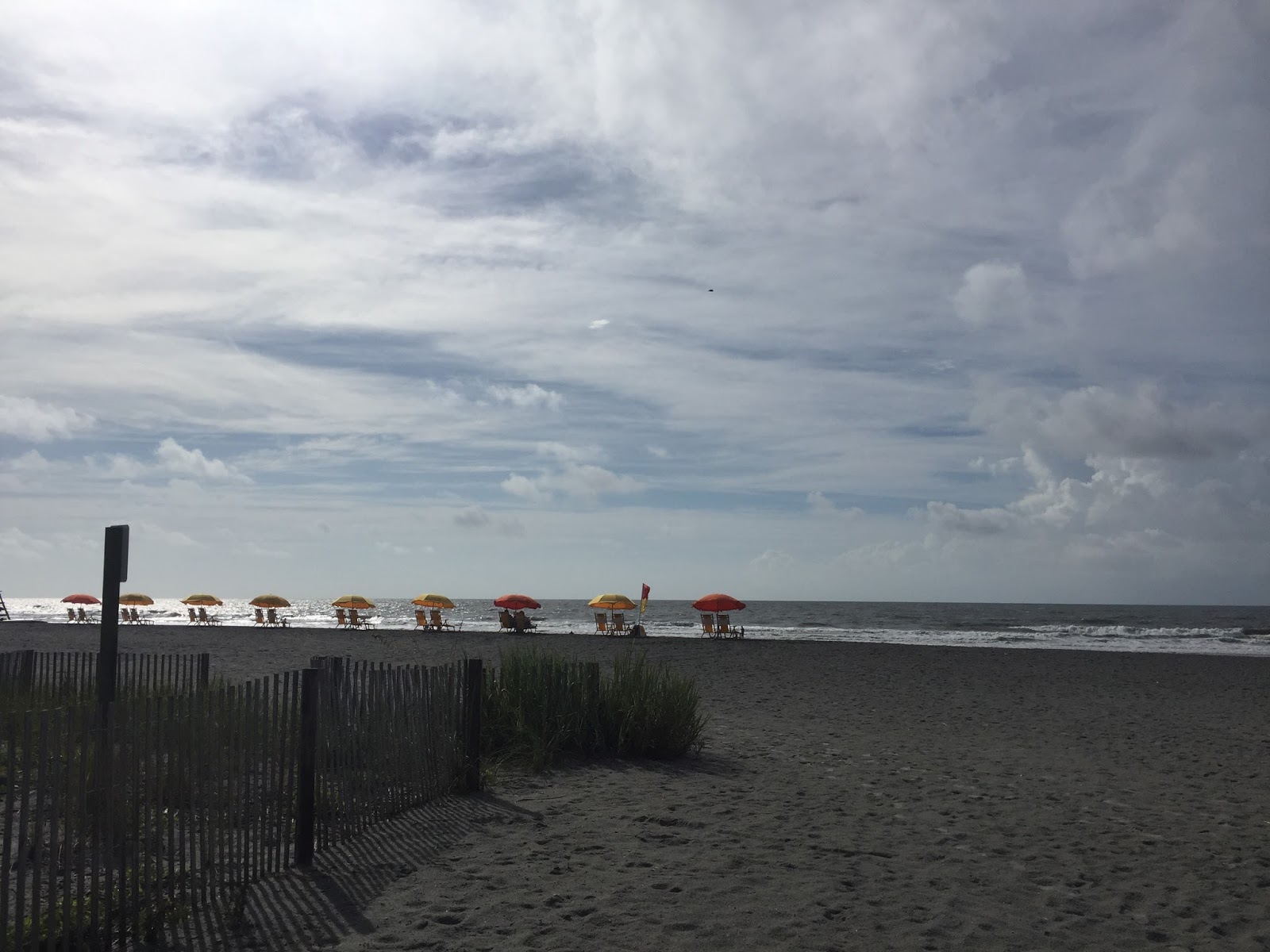 That evening, we headed to the Pour House, the stomping grounds of Shovels and Rope. Again, everyone we encounter was super friendly and we had a blast chatting with other travelers + locals. We grabbed some amazing seafood from the highly-rated Roadside Seafood and headed to an outdoor taphouse/dog bar to let Mozey run. ‘Twas a pretty perfect evening.

One of the days we were there was a bit cloudy, so we decided to ride our bikes down to the lighthouse. I haven’t ridden a bike through the rain since I was a kid, I highly recommend it. There was no one else at the tip of the island and we got to listen to the waves crash on the rocks for a while. After our long trek, we earned some mimosas from the Lost Dog. Their salmon BLT is not to be missed! 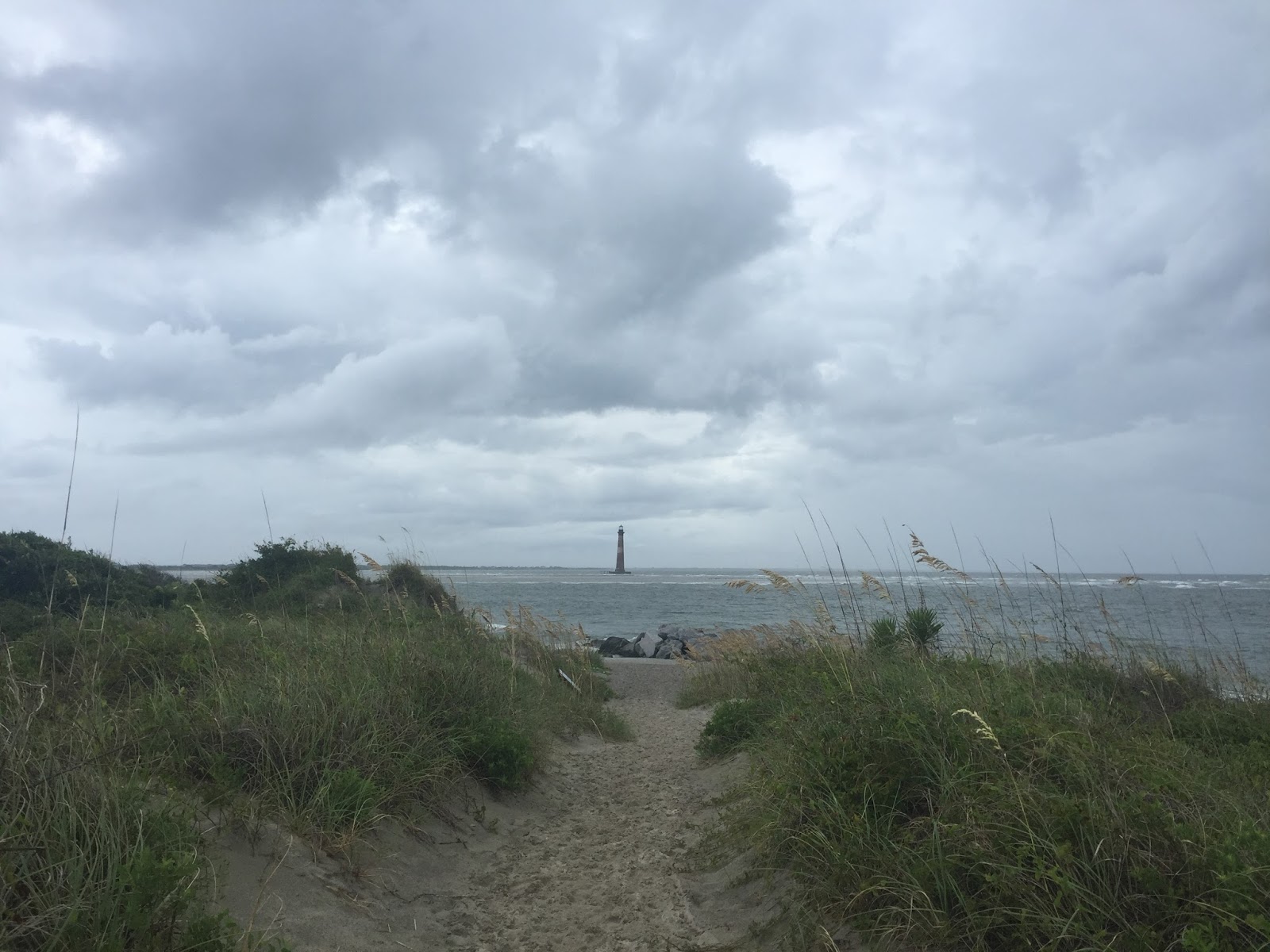 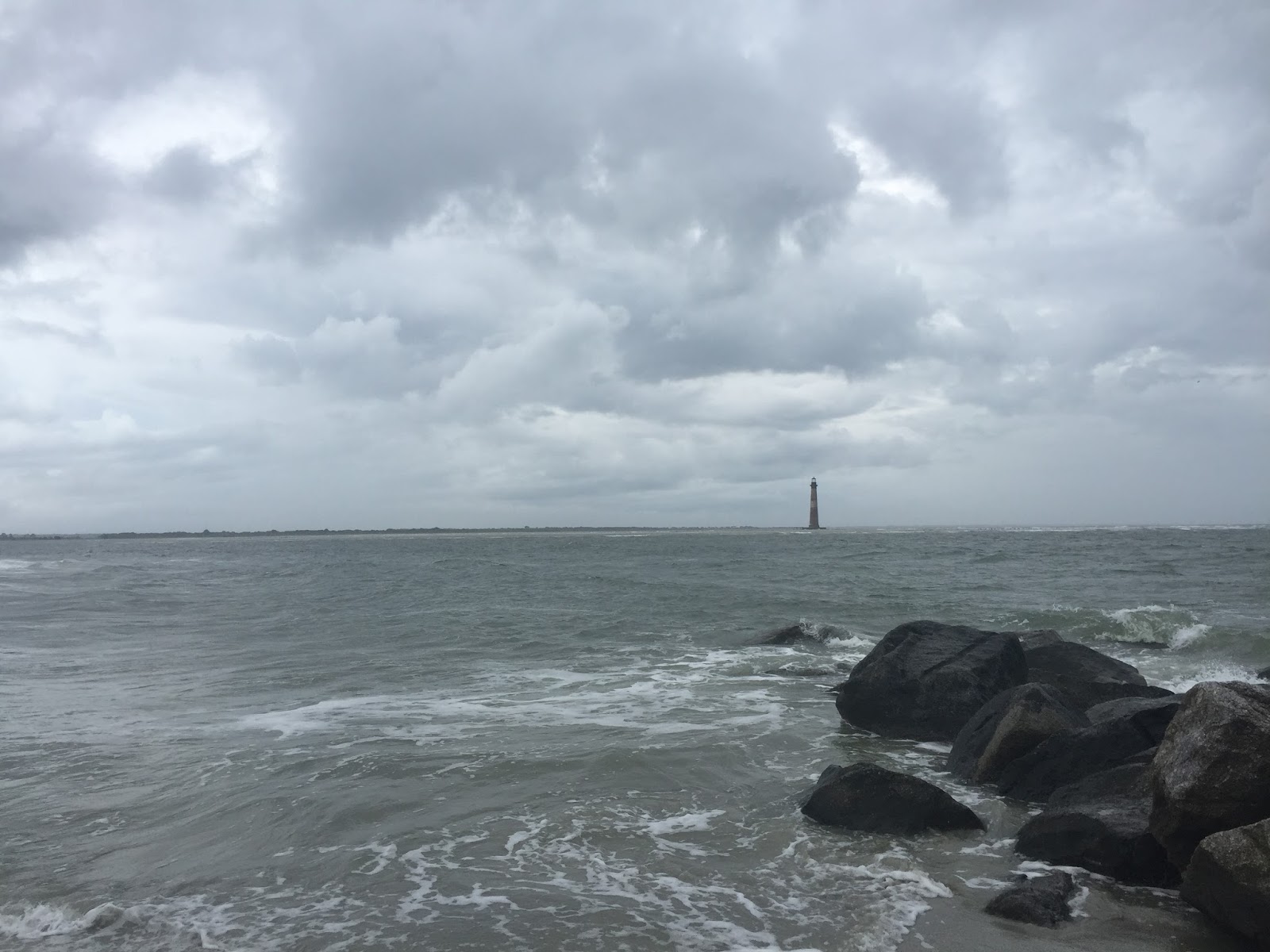 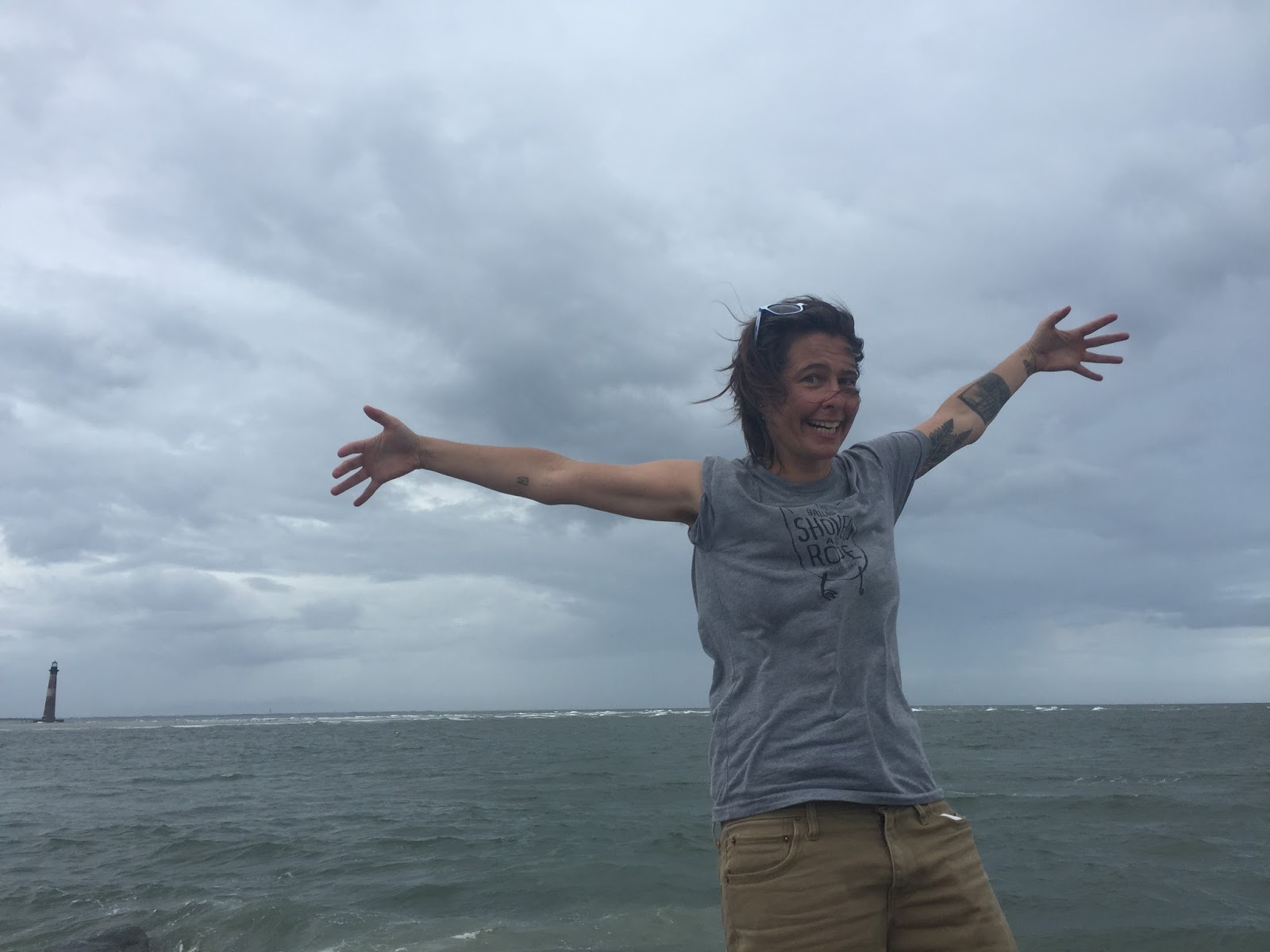 The whole time we were in Folly, everyone was talking about the movie on the beach, so one night we grabbed some pizza, packed up the cooler and dragged our chairs to the beach at sunset. Once the sun was down, we watched Shark Tale on a huge projector – and it was awesome. Maybe one of my favorite nights of the whole trip. 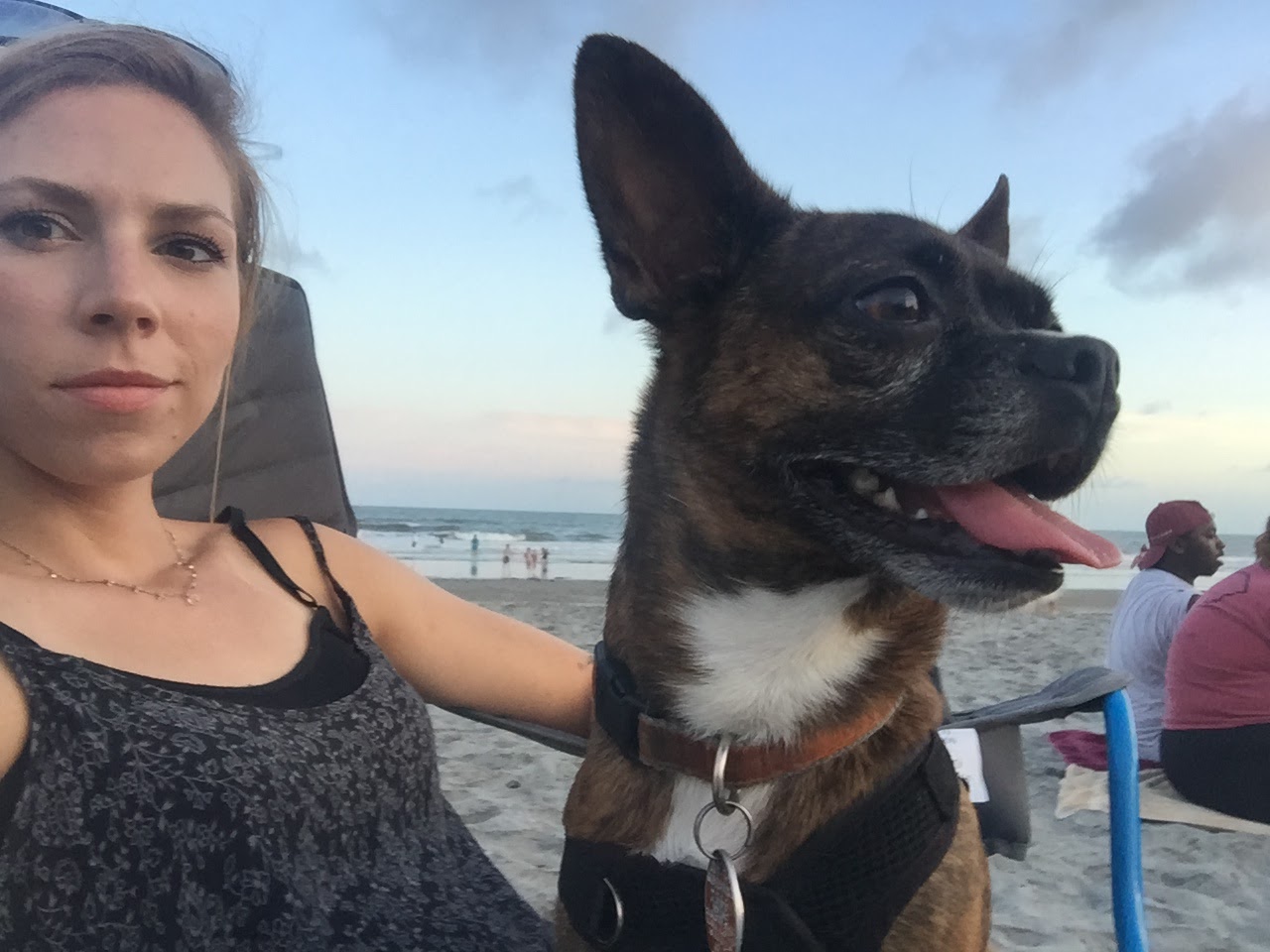 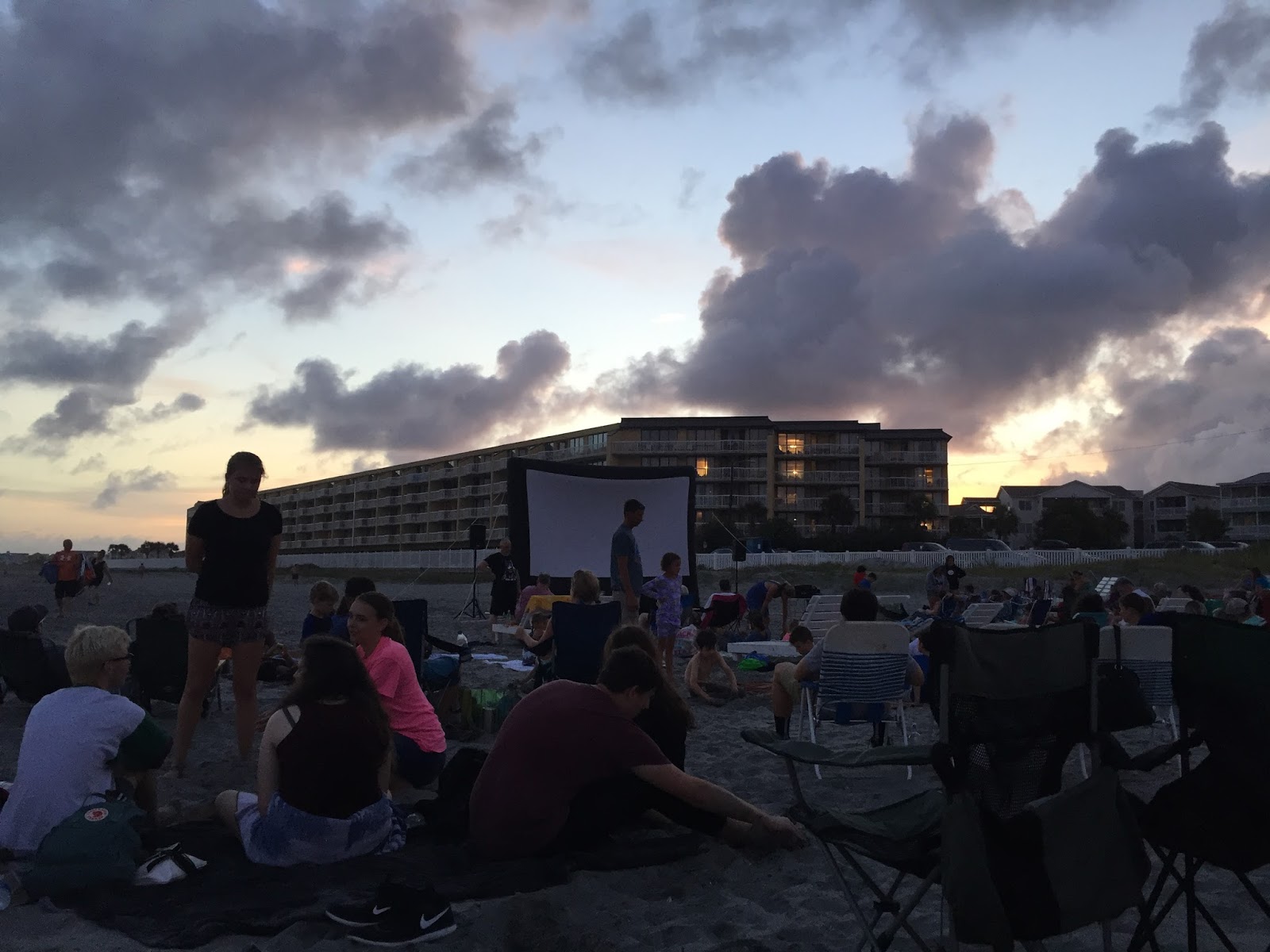 As a treat, we booked tickers to go see Nick Offermann + Megan Mullally’s show, The Summer of 69: No Apostrophe at the N. Charleston Performing Arts Center. The lovely owner + staff at the BBI offered to take care of Mozey while we were out, so we decided to spend the whole day in Charleston. During the day we shopped a bit, popped in the galleries and visited Holy City Brewing, which Heather has been dying to do for years! 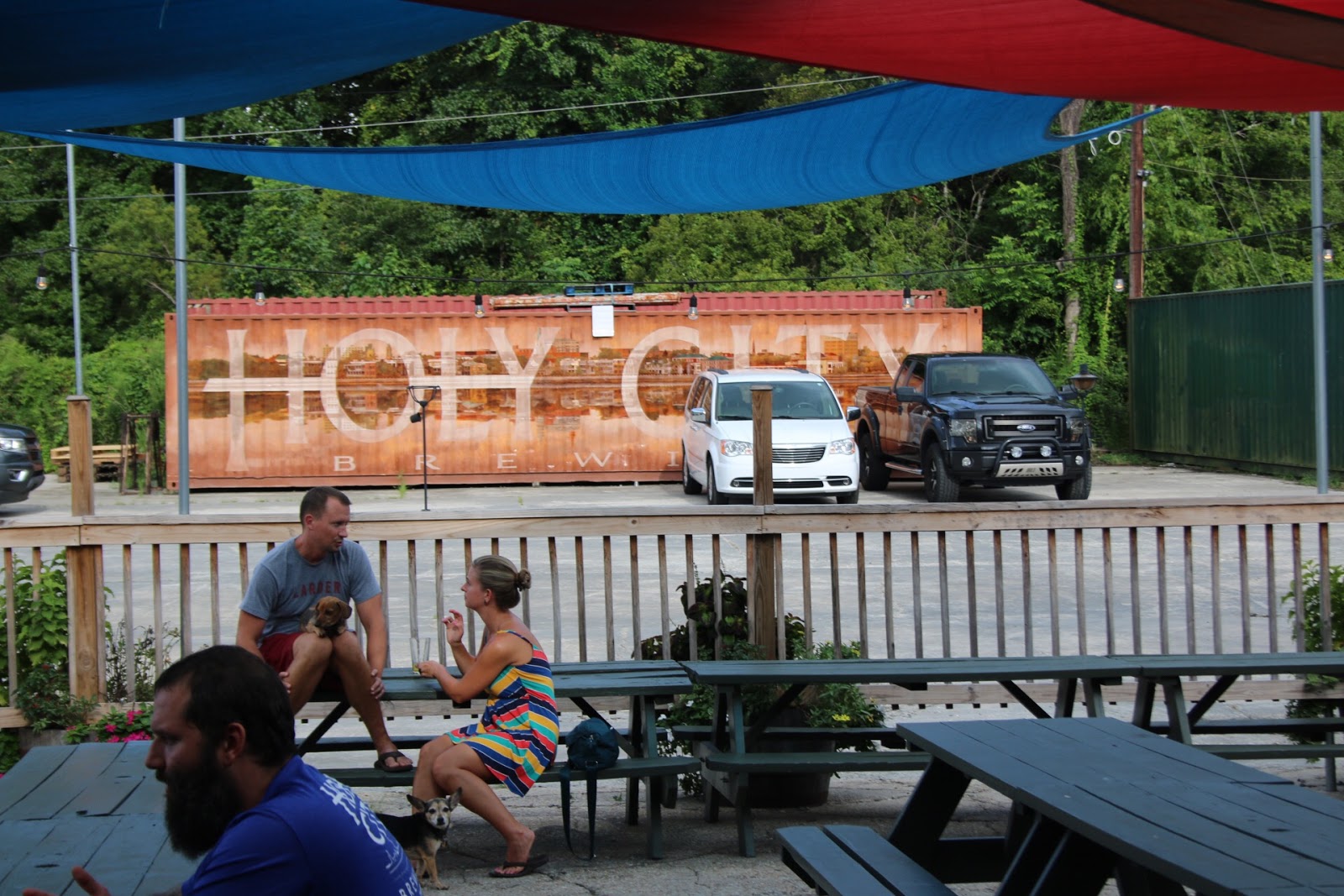 That night, we were super pumped to see the show, and I have to say it was a total disappointment. I used to watch Will + Grace religiously and loved them both on Parks + Rec… I mean who doesn’t? But together, their individual spark seemed to be gone. It was quite a bummer and a lot of people actually left before it was totally over, so I don’t think we were alone in that. But all in all, we got to see some funny, famous people, so it wasn’t a total loss.

Folly was so beautiful and quaint, but with enough going on + the proximity to Charleston, that it was a great way to relax before starting a new gig. Way to go, SC!