Daisy (she came to us pre-named) took her maiden voyage this past weekend. It was both thrilling and terrifying at the same time. Never having towed a 3,000-pound hunk of metal down the road, my brain dreamed up a number of potential disasters. Only a few came true, thank goodness. 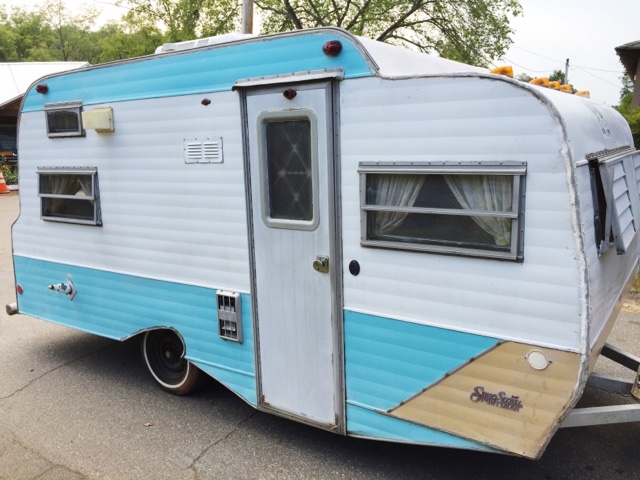 Since it was our first time towing Daisy, we decided to join our friends (who ironically also just purchased a camper, too) at a campsite about 1.5 hours from Asheville, in the Great Smoky Mountains National Forest. Knowing approximately nothing about towing something this big, we figured we should stay close to home on the first go around. Heather used to have a small pop-top camper back in the day, so she has some knowledge. But me? I’m just pretty much holding on and praying.

Thankfully, despite all the teeth gritting it took to get there, we arrived without incident. What’s funny about going to a campground with a camper is that you’re not really roughing it. At all. We were in what’s called a “primitive” site, meaning there was no water or electric hookup, so sadly we had no AC. I kid, I kid. But really, the comfort expectation is high, these people are running generators and setting up adorable little picnic situations. It’s a whole different world than tent camping. 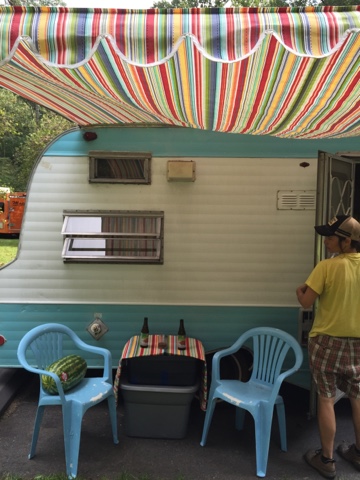 I feel like I am getting fully prepared for retirement, about 30 years early. And the people, holy crap! The camaraderie of an “RV Park”, dare I say it, is impressive. After rolling up into our little spot in the woods, Mozey barely had enough time to pee on something before the first person came over to ask about our camper and tell us to let them know if we needed anything. Seriously, I am down with the senior citizen vibe. 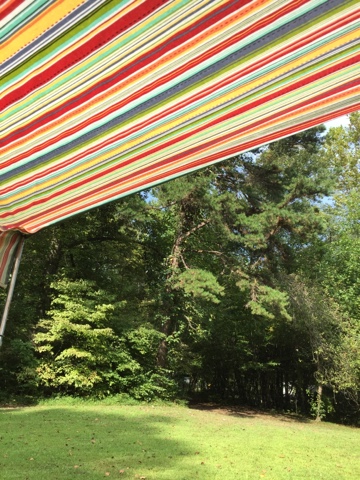 Despite the cushy, old person amazing-ness, we were in National Forest territory, so there was lots of exploring to do. Our first, and only, night there we took a cool hike out of the campground and found an abandoned amphitheater, much to my excitement. I always reference the Secret Garden when I talk about stuff like this, but honestly, exploring secret, abandoned things excites me more than anything in the world. That night we cooked with our friends and sat around drinking beer by the fire, because, what the hell else do you do at night in the woods? 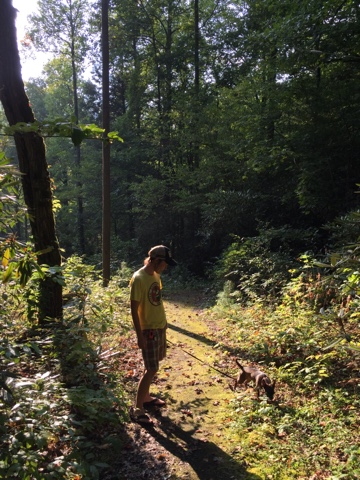 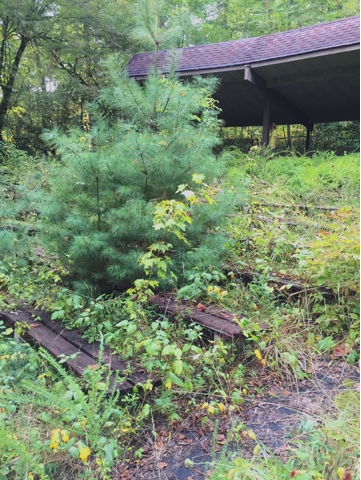 We only spent one night, as this was more of a test run than a true get-away-from-it-all camping experience. We had to pack up and leave by noon the next day, but we wanted to get some hiking done before we left. Luckily, the visitors center was down the road and was advertised as the host to some fun trails. So we (Heather) skillfully plopped the camper in the “large vehicle” section of the parking lot, we packed a little picnic and headed off on the River Trail. It did not disappoint! 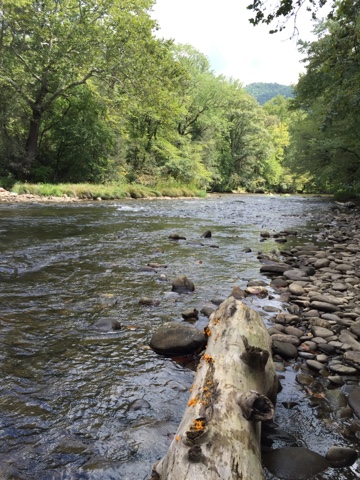 We ate our picnic on a cool log right on the river’s edge while watching the terrified and surprisingly sober tubers plod down the shallow river in front of us. After a quick, candid photoshoot we wandered down the trail and found a sweet swimming spot! Here we dipped and sunned ourselves on a huge rock outcropping like little lizards until we decided we should head back towards civilization.

It was such a short trip, but so sweet! The stars out there were insane, and I will never forget our first night spent in sleeping in Daisy!