Sometimes you just have to get your butt out into some nature.

With its proximity to the Blue Ridge Parkway and the Smoky Mountains, Asheville is known as a hiking destination, but most of these spots require a bit of driving. Because being lost gets my panties in a twist, I tend to do the same hikes over and over. According to Heather’s memory, the first time we fought was when I thought she knew where a trailhead in Hot Springs, NC was….and she did not. Whoops. 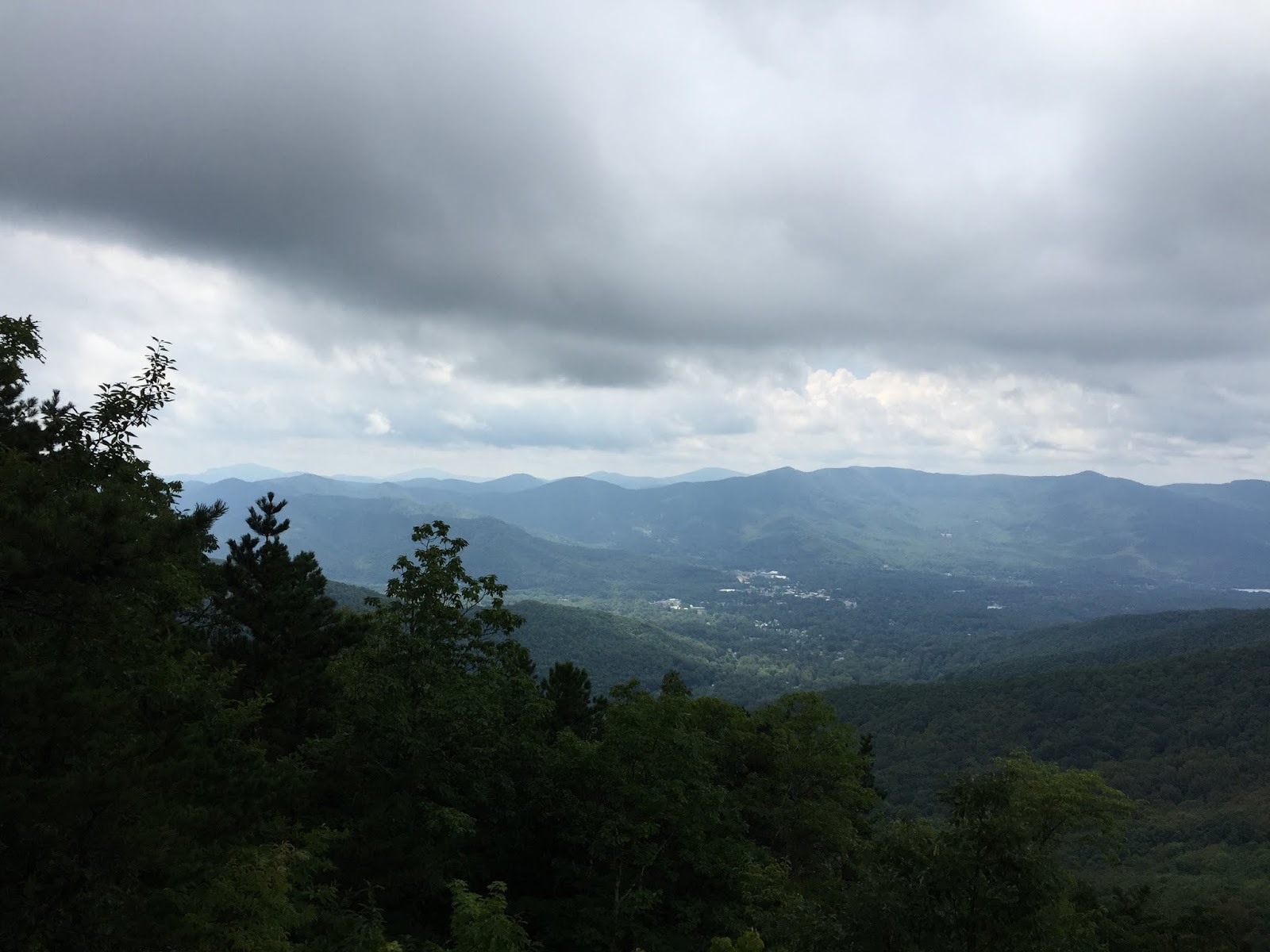 Yesterday, though, we did some thorough research and found a new spot. Our typical hikes are pretty well-known and popular, so I was excited to try a new one, especially after a week of solid socializing. Don’t get me wrong, I love the people. But this is what nature is for, getting deep in some woods and being quiet for a bit.

The hike we went on was called Big Piney Ridge and it’s in Montreat! For all the years I have been going there, I still tend to do the same few hikes, which apparently is a bit nuts since the official Montreat trail map tells me there are at least 20. Derp.

Big Piney Ridge was only about 1.5 miles long, but the entire ascent was at a fairly steep grade and I was huffing and puffing the whole way up. I love a hike with a little butt-kicking action! In the beginning we were traipsing across lots of switchbacks and little mountain streams buried deep in dense forest. As we gained elevation, the vegetation thinned out the sun peeked through the trees, making for a fairytale-like scene. 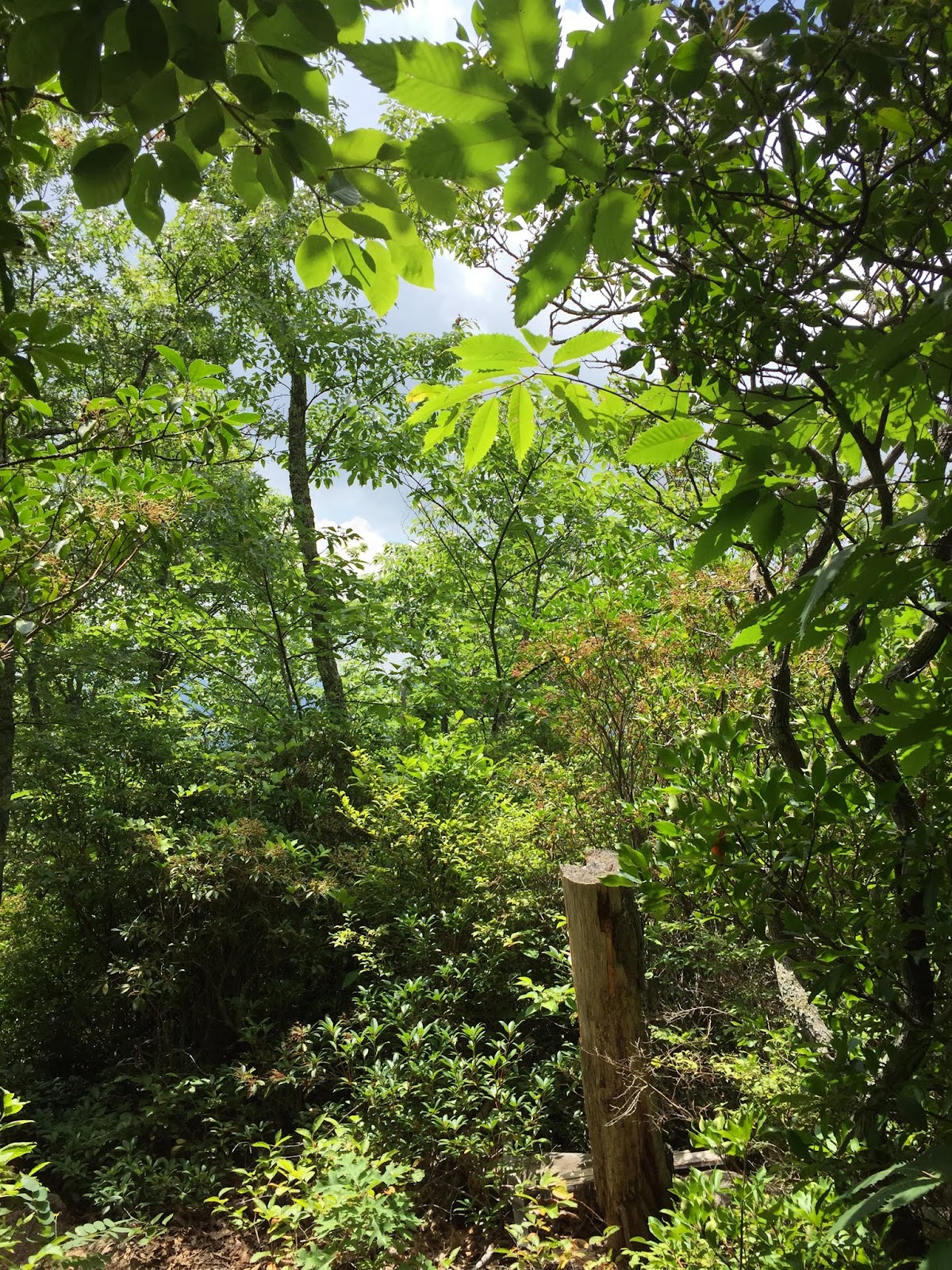 While I believe in enjoying the journey, I do like the reward of an epic view at the end of a hike. Ridgeline hiking just ain’t my thang. This out-and-back terminated at Rattlesnake Rock and would have been the perfect spot for a picnic! Our other go-to hikes like Mount Pisgah and Lookout Mountain both have 360-degree views and are great hang out spots, but the influx of summertime weekend traffic can be off-putting.  We chilled at the top here for about 20 minutes and didn’t see another soul. From our rocky throne, we watched a storm roll in over Black Mountain. I just love watching the clouds move and obscure ridge after ridge until it’s time to hustle back before getting wet ourselves! 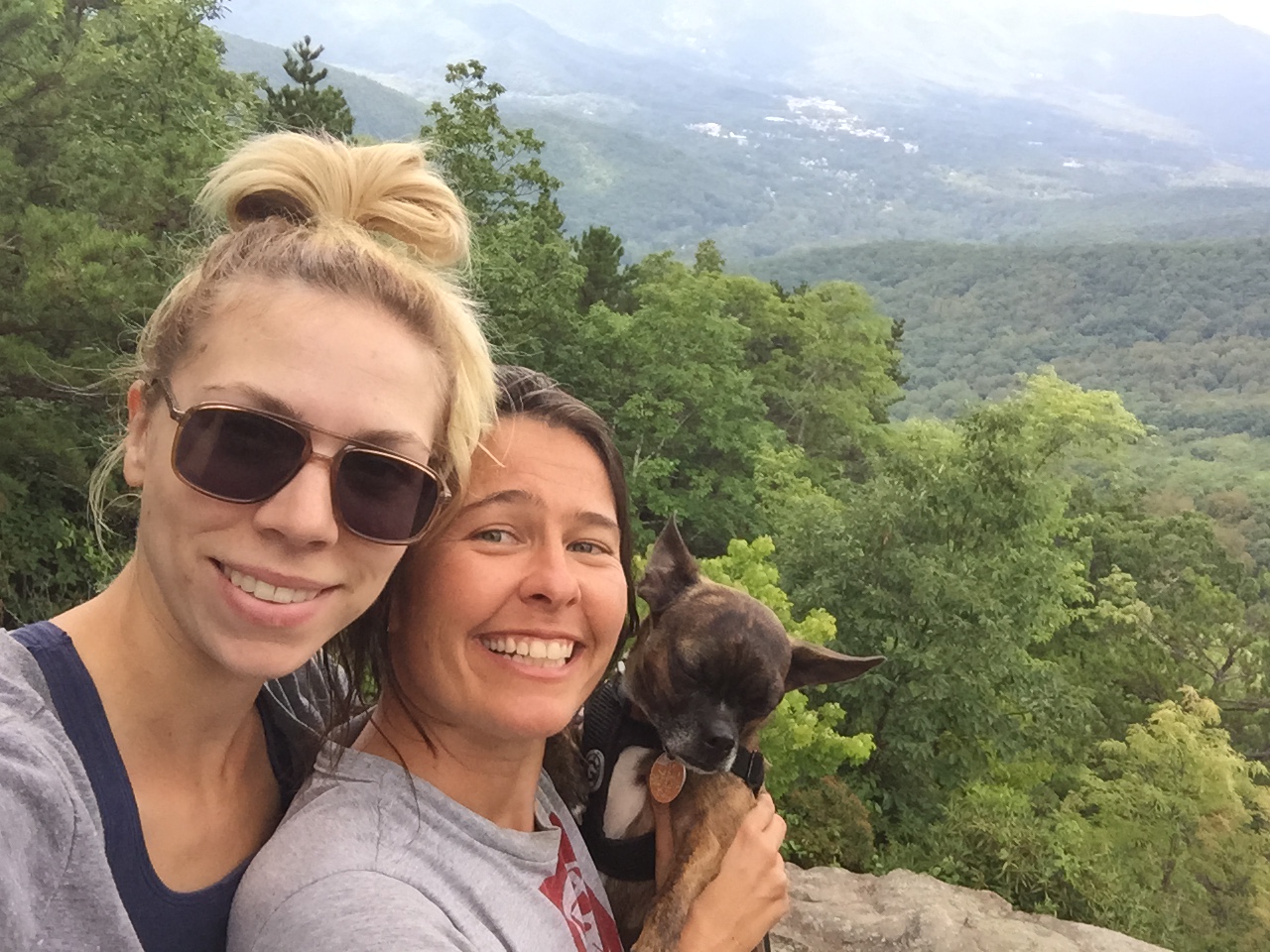 This photo here demonstrates a few things: An unimpressed dog and a couple of guilty parents. On the way up, I let her go off the trail for a second and she instantly started yelping and chasing her tail. Yellow jackets are super aggressive and pretty hard to get away from once you piss them off. A couple years ago we were chased off a hike by an angry swarm. Luckily, this wasn’t too bad but they did try to camp out under her harness and collar and ending up stinging her right between the eyes and on her nose. 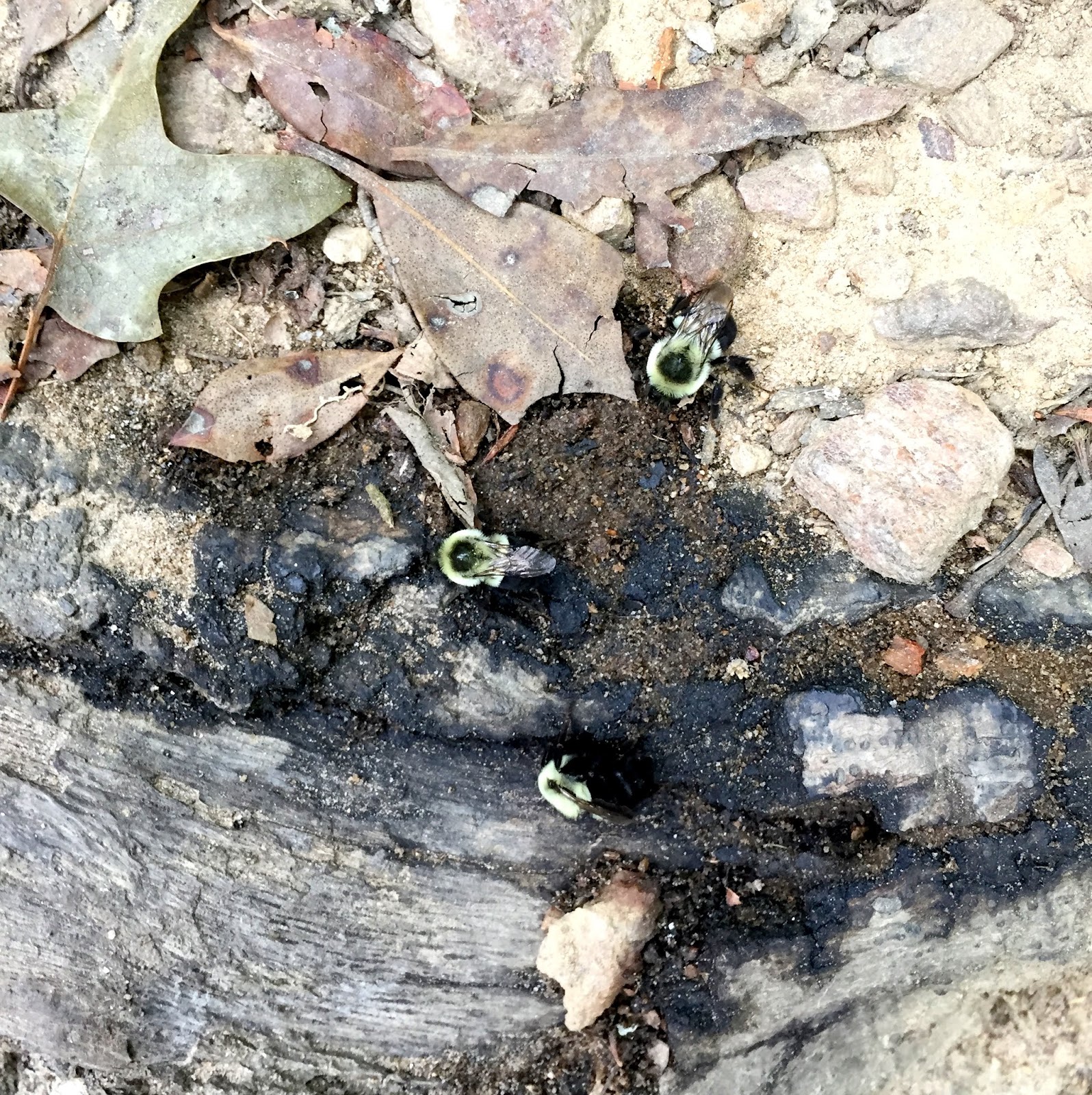 (In an odd foreboding moment, I realized I had taken this bumblebee pic just a few minutes beforehand. Don’t be confused though, these guys are lovers, not fighters.)

There may not be anything more sad than a pathetic, hurt dog. She is totally fine now, thank goodness. She’d never been stung, to our knowledge, so there was a tiny moment of panic wondering if she would be allergic or not. After a few minutes and some snugs, she untucked her tail from between her legs and started pulling on the leash to hike on! Lesson learned folks, lesson learned. 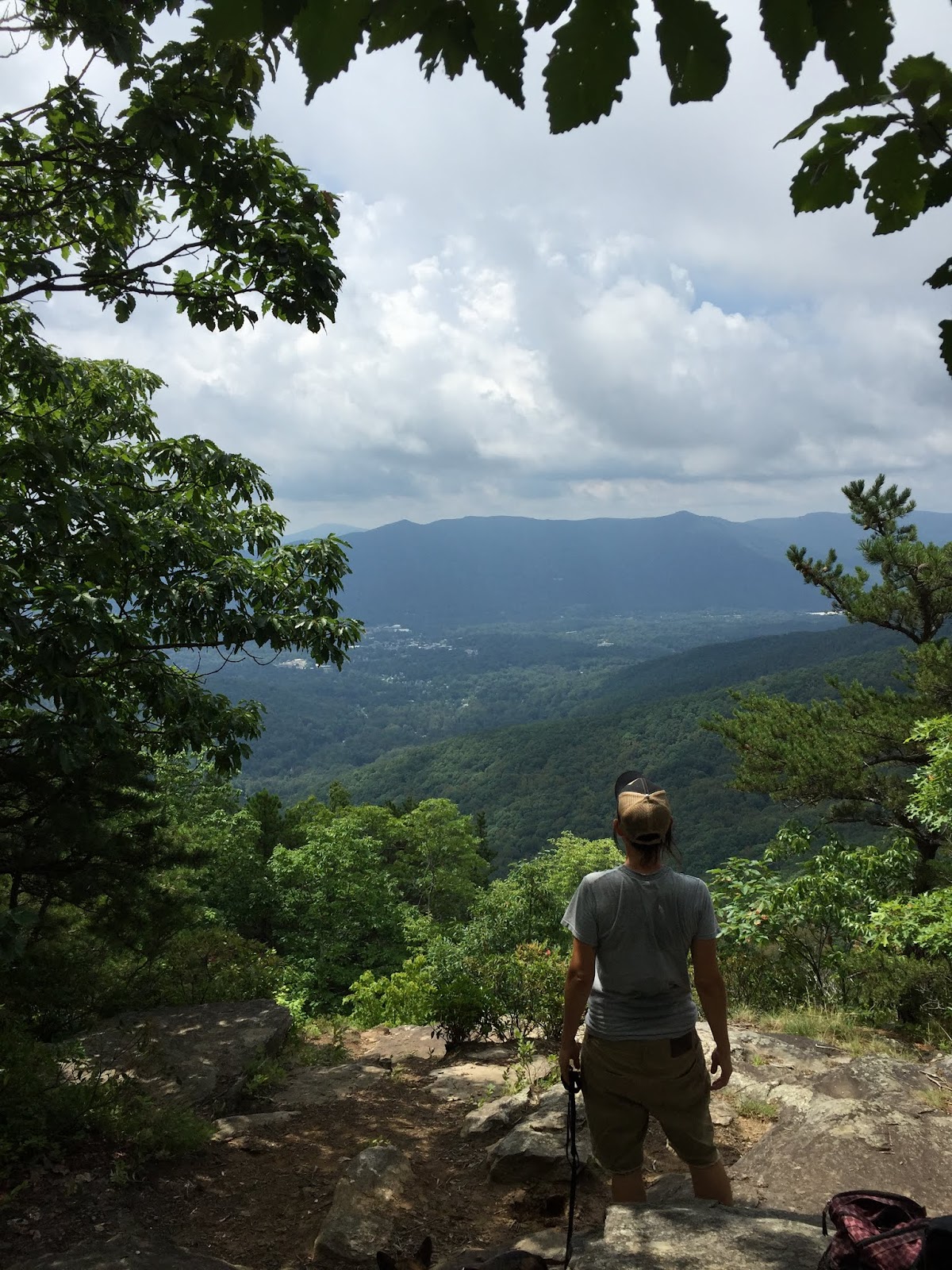 While I loved the privacy of this particular hike, I recommend it if you’re in the Montreat area. Just stay on trail and look out for stinging insects…and bears!